Here come the results for the last week's Java build tools survey. 675 people responded - thanks everyone who contributed!

The answers were not mutually exclusive and a good portion of responders selected several answers. I interpret that as "I use Maven at work and Gradle at home". Or maybe there are multiple projects that the guys are working on and the old projects aren't migrated from Ant to Maven/Gradle.

Anyways, here are the results: 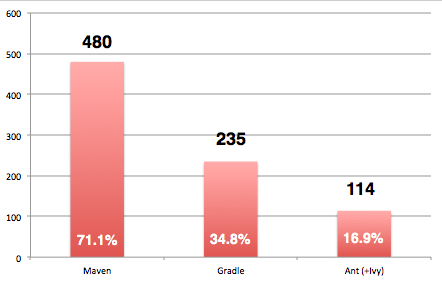 480 out of 675 people indicated that they use Maven, which makes 71.1% out of all responders. Actually this number somehow matches my personal assumption about Maven share. Jason actually confirmed that this should be in line with the previous similar surveys:

@antonarhipov That’s in line with other surveys for the last few years. The 60% is converging toward 85% Maven usage rate from Central.

Gradle was used 235 people out of 675, which makes 34.8%. I was quite surprised by the number and I think this is due that the survey was mostly published via Twitter - I have some followers from Groovy/Gradle community. While I do believe that Gradle is getting momentum as a build tool, I really doubt that its share is high in Java enterprise/legacy projects.

Ant (+Ivy) was mentioned by 114 responders and is at the third place with 16.9%. I think this number will be much much higher if we take only the legacy/enterprise projects.

Maven vs Gradle vs Ant

I think that there's no Maven vs Ant debate any more. Maven has won. Tooling support is (mostly) excellent and setting up a Maven projects in all major Java IDEs is (mostly) a no-brainer. There's definitely the Maven vs Gradle debate - there's plenty of details to debate about, which is better (at the moment of writing this post). But yet again, tooling support for Maven is the main argument why Maven is better. I think that without good IDE support Gradle won't overtake the build tools' market share, period.

BTW, I'll keep the survey opened for some time - maybe it will get more responses.

P.S. There's a good summary about the build tools at Rebel Labs, if you're interested.

UPDATE: SBT was the 4th in the standings. 2.8% of respondents have indicated that they use SBT.

We have migrated our small project (Plumbr, if somebody does not know :) ) from Ant to Gradle a year ago. We had no pain to ease, it was just curiosity. But I love Gradle more and more with every day I use it and I bend it to my wishes. But yes, tools support is essential. The very same "enterprise" projects, who endure much pain from their Ant scripts, they have that pain in the first place because their build script is (very) complex. Thus their Gradle script will be not trivial, albeit easier than Ant's. And for writing non-trivial build scripts you need support from your IDE(A). And that is lacking in the moment.